THE LOST CATTLEYA by Brian Milligan

Do you grow Laeliocattleya Mini Purple, Sophrolaeliocattleya Hazel Boyd or Sophrolaelia Jinn? Not any more, I’m afraid. Look them up on the Royal Horticultural Society web site (www.rhs.org.uk/research/registration_orchids.asp) and you’ll find that they have dis­appeared! Actually they’re still there but listed elsewhere under new names, which can be difficult to find.

What has happened to Laeliocattleya (Lc.) Mini Purple, which was originally registered (in 1965) as the hybrid between Laelia pumila and Cattleya walkeriana? Well, a few years ago Laelia pumila, as well as all the other Brazilian “laelia” species, were transferred to the genus Sophronitis because DNA studies showed that they were much more closely related to existing sophronitis species than to those laelia species from Mexico. The above hybrid is therefore no longer a laeliocattleya but has become a sophrocattleya, to be known henceforth as Sophrocattleya (Sc.) Mini Purple. The same change applies to all other hybrids between cattleyas and Brazilian ‘laelias’.

Before you race out to change all your labels from Lc. to Sc., I should stress that not all laelia species have been transferred to the genus Sophronitis – only those from Brazil! Those laelias native to Mexico remain as such and therefore the hybrid between Laelia anceps (a Mexican species) and Sophronitis coccinea retains its original name, namely, Laeliocattleya Camargo.

So, what has happened to our old friend Sophrolaeliocattleya (Sic) Hazel Boyd? It’s now listed as Guarisophleya Hazel Boyd, which may be a little shorter to type but certainly no easier to pronounce or remember! Similarly, Sic. Jewel Box has become Guarisophleya Jewel Box. Both are hybrids between species (or hybrids) containing Guarianthe, Sophronitis and Cattleya.

Although most older cattleya growers are likely to ignore these name changes, new growers will gradually adopt them, which unfortunately will require the judges to have both old and new names at their fingertips! It’s enough to make me trade my cattleyas in on a few new cymbidiums! Heaven help us all if someone decides to split up the genus Cymbidium] 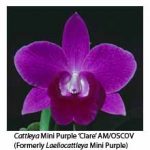 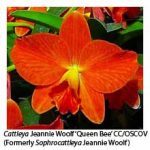 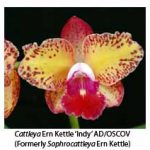