Paphiopedilum Maudiae and ITS RELATIVES by Alan Hope

It’s a little over one hundred years since Charlesworth & Co. registered P. Maudiae (1900). Albinistic (albino) forms of P. callosum and P. lawrencianum were used to create this wonderful green-and-white flowered paphiopedilum hybrid, arguably one of the most popular ever produced. Together with P. Harrisianum (the first paphiopedilum hybrid, 1869) and P. Leeanum (1894), P. Maudiae has had a profound influence on paphiopedilum culture and hybridisation.

P. Maudiae has proven to be a most successful crossing in terms of both impact and longevity. The first crossing between P. callosum var. Sanderae and P. lawrencianum var. Hyeanum produced albinistic offspring bearing large glossy flowers with white dorsal sepals veined with green, light green-veined petals and a green labellum. These seedlings were a sensation at the time and many of these plants are still grown today. A well-grown plant of P. Maudiae ‘Magnificum’, which received its FCC/RHS in 1901, is still capable of success on the show bench. The P. Maudiae cross was so popular and had such a significant impact on our hobby that most orchid societies introduced a class for P. Maudiae in their show schedules.

The successful use of albino parents in the first P. Maudiae cross was probably not entirely fortuitous, for P. Gowerianum (P. curtisii x P. lawrencianum, 1893) and P. Goultenianum (P. callosum x P. curtisii, 1894) were already known. However, its startling success opened the way for other hybridists to use different parents. The crossing of an albino P. callosum and a normal coloured form of P. lawrencianum to produce P. Amy Leeman (1906) created an interesting dilemma for the RHS in ratifying the chosen name. The RHS decision that both albino and coloured hybrids between the same two species would bear the same name applies equally today. Accordingly, P. Amy Leeman was renamed P. Maudiae var. Amy Leeman, the first in a long line of the so-called P. Maudiae ‘coloratum types’ using normal-coloured forms of the two parent species.

It was not until the 1960s that two discoveries stimulated further development in P. Maudiae-type hybrids. The first was the 1964 discovery of P. sukhakulii, a Thai species with a large flower and spotted petals. This new species was soon crossed with P. Maudiae to give P. Makuli, a well-shaped hybrid with petals held more horizontally than those of the normal P. Maudiae. A later discovery of an apparently albinistic form of P. sukhakulii (forma ‘Aureum’) led to crossings with the green- and white-flowered forms of P. Maudiae. While attractive, paler-coloured forms of P. Makuli were produced, they were not true albinos.

The second major discovery in the mid-1960s was of a very dark-red coloured form of P. callosum, also from Thailand. Named P. callosum ‘Sparkling Burgundy’ for its red-wine colour, it opened up a wide range of new hybrid possibilities. In the late 1970s two further dark-coloured P. callosum plants were found, namely P. callosum ‘Jac’ and P. callosum ‘Ebon.’ These three plants were used in remakes of many of the previous P. Maudiae crosses and have since produced a range of wine-coloured ‘Maudiae type’ paphiopedilums, commonly referred to as ‘vinicolors.’

In the last 20 years this line of breeding has progressed and the results are outstanding. The inclusion of other paphiopedilum species in the breeding programs has added size, colour and variety to the P. Maudiae group, yet retained its appeal. It also raises the question of what now should constitute a ‘Maudiae-type’ for judging purposes? I would like to see the compatible hybrid forms mentioned above included, rather than assigning these marginally different newcomers to the inappropriate ‘Novelty’ class. 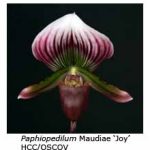 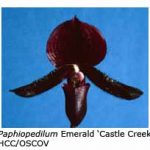 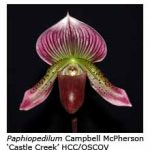 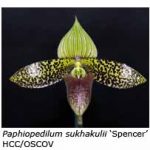