The genus Maxillaria comprises at least 700 species that are distributed throughout the Americas between Florida and northern Argentina. Most species carry only one leaf per pseudo-bulb, although some carry up to four. Each stem carries a single flower but some species compensate for this by producing several flowering stems from each pseudo-bulb. Most species require a heated glasshouse but a few may be successfully grown in a shade-house fitted with a solid roof.

By far the most common of the cool-growing species is Maxillaria porphyrostele, which produces its yellow flowers on rather short stems in October (if grown without heat). The column of the flower is purple (porphyrostele means purple column). In common with many other maxillarias, this species resents being divided. Its divisions may take a year or more to settle down before they flower again.

Another species that grows and flowers well for me without heat is M. cucullata, which has orange/yellow flowers in spring. According to the books, M. densa should do the same but it has refused to flower ever since I moved it out of my glasshouse five years ago. M. tenuifolia also grows well for me outdoors but no longer flowers as prolifically as it did when grown with heat. It produces its brick-red flowers, smelling of desiccated coconut, in December when grown in the glasshouse. Regrettably, there is no longer room for it there.

Another fairly common maxillaria species is the miniature Maxillaria sophronitis, which grows well for me under either cool or intermediate conditions. The species epithet indicates that the flowers have the same colour as those of Sophronitis coccinea, that is, bright red. Unfortunately, M. sophronitis produces its flowers reluctantly. My plant in the shade house produced five flowers in September, while that in the glasshouse provided only two! Occasionally one sees spectacular specimen plants in flower but that is the exception, not the rule!

Other maxillaria species that grow and flower regularly for me in the glasshouse, and that I recommend, are M. cogniauxiana, M. grandiflora, M. juergensii, M. luteo-alba, M. meleagris, M. picta and M. variabilis. The large, white flowers of M. grandiflora are especially attractive, while those of M. juergensii and M. cogniauxiana are small and dark in colour – their small plants and flowers are curious, rather than showy. In all cases, I find that re-potting or division sets back their growth, so I carry out these operations as infrequently as possible. 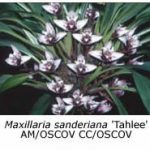 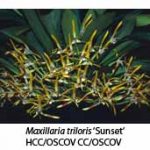 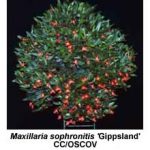