Most of the epiphytic orchid species in our collections grow in nature with their roots partly or fully attached to tree branches or trunks. Why then, do we try to grow them in pots? Mainly for convenience – most orchids on mounts need to be watered daily during their growing season, whereas those in pots may be left for two or three days between waterings in summer and for a week or two in winter before they need to be watered again. But there are disadvantages in trying to grow some species orchids in pots; it’s very easy to rot their roots by keeping the potting mix too wet, especially when the orchids in its natural dormant season and its roots are incapable of transferring the moisture to the rest of the plant. Those species with long dormant periods, such as barkerias, Encyclia citrina, Laelia speciosa and some oncidiums, grow much better on mounts; cultivation in pots often leads to slow decline unless great care is taken to water only when absolutely necessary.

Tree branches are the natural hosts for many orchids, so it seems logical to use tree branches for mounts. In nature, however, many orchid species prefer particular tree species and it follows that these orchids may not do as well on some mounts as they do on others. Unfortunately in many instances, especially with exotic species, the natural host is unprocurable here in Australia, so we must make do with branches from our common garden trees. Generally the branches of rough-barked hardwood trees, such as oak, casuarina, peach, apricot etc., are most suitable. Orchid roots seem to cling better to rough bark than to smooth, and rot-resistant hardwood is more durable than many softwoods, such as pine. Unfortunately no timber mount lasts forever and eventually the orchid will need to be remounted when the mount sheds its bark, rots or is attacked by borers or other insects. Some growers dip their mounts periodically in insecticide solution to deter insect attack.

Alternatives to tree branch mounts include natural cork (the bark of cork oak trees grown specifically for producing cork, mainly in Portugal) and old (weathered) hardwood fence palings. All of the above mounts dry out quite rapidly and need watering daily during most of summer – even more often on very hot days. Some growers prefer to use tree fern mounts (aged, black material is best), because it retains more moisture and therefore needs watering a little less often. However, in my experience orchids mounted on tree fern do well only for a few years before they begin to decline. This behaviour is generally attributed to the development of acidity in the mount. Some growers dip their tree fern mounts periodically in lime solution to counteract it. Perhaps I should have applied the lime treatment earlier or more frequently because I’ve never had much success in resurrecting sick orchids mounted on tree fern in this way.

Many alternatives to timber, cork or tree fern mounts have been tried as orchid mounts. Examples include slate, sandstone, upturned terra cotta pots and terra cotta agricultural pipes. One ploy to avoid the need for frequent watering is to mount the orchid on a terra cotta pipe blocked at one end by a suitable plug. The pipe is then hung from the shade-house roof and (during the summer months) filled with water. Slow diffusion of water through the porous pipe keeps the orchid’s roots damp and also helps to maintain a more humid environment. I’ve seen this method used for growing the Australian thumb-nail orchid, Dockrillia linguiformis, but don’t know how well it works in the long term.

A recent innovation, which I first heard of about a year ago, is the use of recycled rubber floor matting for orchid mounts. These mats are made of shredded car tyre rubber which has been bonded together to form a water-permeable mesh about 12 mm thick. The matting holds a lot of water when first wet but drains and dries quickly because none is absorbed by the rubber itself. These mats are not cheap (about as expensive as natural cork) but have the advantage that they should be almost indestructible, being resistant both to decay and to attack by insect pests. Mounts can be cut to size with a pruning saw and drilled like tree branches to attach wire hangers. They have a very coarse surface, to which most orchid roots readily attach themselves. Orchids growing successfully for me on rubber mounts include Dendrobium loddigesii, D. schneiderae, Maxillaria sophronites, Encyclia polybulbon, Baptistonia echinata, Zygostates grandiflora and Polystachya pubescens.

When tying orchids to mounts, it’s important that the plant be secured firmly so that the developing root tips are not damaged when the plant is moved during handling or by wind. The plant should always be placed directly on the mount, never with a layer of moss between the two. A thin layer of moss may be placed over the roots to conserve moisture but the new roots seem to attach themselves faster to the mount if no moss is used (assuming that you can water the plant daily).

Nylon fishing line is often used to secure an orchid to its mount. It must be pulled tight enough to fasten the plant to its mount firmly but not so tight as to cut the pseudobulbs or roots. Copper wire is sometimes used for large plants. I prefer to use plastic-covered wire because it is less likely to damage the plant, even when pulled tight. Yes, I agree that it’s unsightly, but it can be removed within a year or two, as soon as the roots have taken a good hold of the mount. If you are unable to water your mounted orchids often enough to maintain good growth, try placing their mounts on the bench rather than hanging them. Hanging mounts seem to dry out twice as rapidly as those lying flat. Mounted orchids are best fertilised by dipping the entire mount in a dilute solution of liquid fertiliser. I dip my mounts in a very weak solution stored in a 40-litre plastic bin in my glasshouse on most days during the growing season. 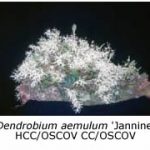