DRACULAS AND DRACUVALLIAS by Bill and Jan Miles

The genus Dracula is comprised about a hundred species native to Central and South America. Its name is derived from the Latin dracula, which means little dragon, in reference to the strange, sinister appearance of the flowers. The names chosen for species such as Dracula diabola, D. gorgona and D. vampira unjustly stress the perceived ‘nasty nature’ of these fascinating and rather beautiful orchid flowers. Draculas are mostly found in moist forest country between Mexico and Peru.

Our draculas are grown in a greenhouse maintained between a minimum temperature of 6-8°C and a maximum of about 30°C. We provide 30% shade in the winter months and 70% shade during summer. In our experience we find that draculas are much easier to grow and more forgiving of cultural mishaps than masdevallias. They seem to tolerate extreme weather conditions better than do masdevallias and don’t tend to drop their leaves in the same manner when stressed. Misters operated periodically during the day to raise the humidity. Although we try to keep the relative humidity at about 60%, we can’t always achieve this goal on hot summer days.

We water our draculas often during summer, the frequency of watering depending on weather conditions and the potting medium used. We don’t use town water because it is pumped from a bore and has a very high salt content, which causes leaf-tip dieback. Instead we use rainwater stored in two large rainwater tanks. Our draculas are grown in a potting mix of fresh Tasmanian sphagnum moss to which 30% polystyrene foam has been added. They are fertilised with Peters XL fertiliser, which we mix in a batch tank at about a quarter of the manufacturer’s recommended strength. We avoid the use of higher fertiliser concentrations, because they kill live sphagnum moss.

We use 80 mm mesh pots for our smaller divisions of draculas and plant the larger ones in square vanda pots. Our specimen plants are grown in wooden slatted baskets. They mostly hang about head height in our greenhouse, others hanging from carousels. Some are also suspended from the greenhouse walls.

Our preference is to re-pot draculas in spring and autumn, but we have so many that we need to re-pot throughout the year, except for the hottest months. We try to re-pot every 12 months, depending on the state of the sphagnum moss. When we divide plants we make sure that the divisions have no less than a dozen leaves, so as to give them the best chance of survival.

Draculas are fairly difficult to take to shows and meetings because their flowers wither under dry conditions. However, it is possible if precautions are taken, such as placing them in a polystyrene box containing a 50 mm layer of damp sphagnum moss topped with ice. We also spray the flowers with water occasionally when they are on display, otherwise they quickly droop under the lower humidity that prevails at most venues.

What species do we recommend? This is a difficult question, as there are so many different and varied draculas in a wide range of size and colour, but for ease of cultivation we recommend Dracula bella, D. vampira, D. erythrochaete, D. cordobae, D. gigas, D. gorgona, D. simia, D. tubeana and D. mopsus.

We have not found many good dracuvallia hybrids but one should bear in mind that relatively few have yet been made. One particularly nice one is Dracuvallia Blue Boy {Masdevallia uniflora x Dracula chimera). We have also seen Dracuvallia Fleur {Masdevallia veitchiana x Dracula gigas) – its orange flowers resemble those of a large Dracula gigas. In general, we have found dracuvallias more reluctant to flower than draculas.

Books that we have used to identify our draculas are 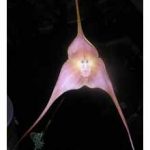 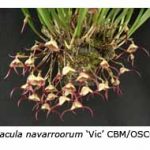 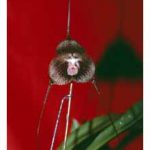 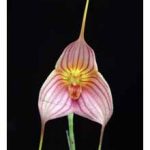