The name Angraekum derives from Angrek, a Malay word for orchid, and sesquipedale, meaning foot-and-a-half, referring to the length of the spur on the labellum of the flower. Its common names include Comet Orchid and Star of Bethlehem.

Found in Madagascar, Angraecum sesquipedale is a monopodia epiphyte or lithophyte of the Vanda family. The normally unbranched stem may grow to a metre tall, with leaves up to 35 cm long. The ivory to greenish white flowers are star-shaped, up to 22 cm across, and are produced in winter. The labellum has a tubular spur about 35 cm long, with nectar in the lower 4 cm. The flower is fragrant at night.

In 1850 Charles Darwin surmised that there must be a nocturnal insect in the Madagascan forest with a 35 cm proboscis that was capable of pollinating this orchid. Darwin suffered much ridicule but forty-one years later such an insect was discovered. It was a Madagascan hawk moth, duly named Xanthopan morgani predicta.

Angraecum sesquipedale needs some shade and should never be grown in direct sunshine. Ideal temperatures are 20-27°C by day and 15-20°C at night. A cooler period is appreciated after flowering but no rest period is needed. Plants do well when grown in either baskets or pots, using bark or Sphagnum moss as the potting medium, which should be kept moist; a relative humidity of at least 60% is essential. This species should be watered frequently in summer but less often in cooler weather. Salt build-up should be avoided by using soft water or by leaching regularly. Weekly feeding with quarter-strength liquid fertiliser is appropriate during summer but it should be less frequent at other times. Root disturbance should be kept to a minimum when re-potting.

Angraecum sesquipedale is capable of carrying several racemes, each bearing four flowers. No true angraecums have yet been awarded by the OSCOV Judging Panel – a Highly Commended Certificate was awarded to Angraecum philippinense in 1998 but this species was subsequently transferred to the genus Amesiella. 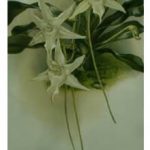